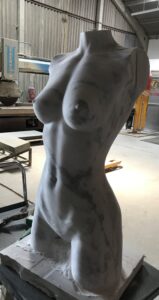 People young and old have rediscovered their gardens during the coronavirus crisis, and many have taken it upon themselves to renovate their outdoor spaces as a place to retreat during the lockdown. If you’re thinking of adding stone sculptures to your garden, it’s unlikely you will be following in the footsteps of rock star Sir Rod Stewart,

According to the Daily Mail, Sir Rod has sought permission to erect four topless statues to overlook an ornamental pond at his £5 million Essex estate.

The ‘Do You Think I’m Sexy?’ singer wants to install two male and two female ancient Greek-style sculptures on four pillars of a portico at his Grade II listed mansion, located on the edge of the Epping Forest.

He has employed an award-winning landscaping firm to carry out the garden makeover, aiming to create a ‘classical garden space’, according to the documents received by the local council, filed under the name of Penny Lancaster/Stewart.

Further modifications include a tiered stone water feature at the base of the portico, a paved seating area, lawn pathways, decorative metal arches and scattered topiary globes. There will be also trees and plants installed to create an ecologically biodiverse habitat

Sir Rod and his wife Penny have recently returned to the UK after spending the winter self-isolating in Florida during the coronavirus pandemic.

It is believed that the couple plan to spend more time at the 10-bedroom 18th-century property, which Sir Rod purchased in 2013

If you’re renovating your garden and need a stonemason in Kent, then get in touch today.